Experts and the Quest for Dietary Culture

Mochi from Ancient Times to the Modern Day (Winter)

On top of the cutting boards there are big round pieces of mochi (rice cake). The artist of this image has not depicted steam coming from the mochi, but since one of the women is actively moving her fan, the viewer understands the freshly prepared mochi must still be hot. To cool the mochi, pieces have been arranged in various shapes on top of straw mats. On the left side of the image, the mats are packed with mochi in all sorts of shapes, such as namako-mochi (sea cucumber rice cake), round mochi and noshi-mochi (good luck rice cake), leaving no space for more mochi.

This picture was drawn by the ukiyo-e artist Utagawa Kunisada (1786-1865), who produced many actor prints and pictures of beautiful women. Kunisada was probably the most popular ukiyo-e artist of his day. As a master of balanced compositions and dynamic human figures, Kunisada has managed to draw a splendid seasonal picture that not only depicts the preparation of mochi for the new year, but also includes some of the most popular kabuki actors of his day.

In Japan there is a tradition to eat mochi during new year that has existed since ancient times. This tradition is said to date back to the Heian period (794-1185). During the Edo period (1603-1868), people also started preparing mochi in various places during the second half of the last month of the year. At merchant homes, people pounded their own mochi, while commoners living in townhouse ordered their mochi at sweet shops.

Much like today, with people preparing mochi in soup, baking it or putting anko (red bean paste) inside, it seems like there were various ways to eat mochi during the new year. Since Kunisada's image depicts preparations for the new year, people probably started preparing mochi at least a few days before the New Year started.

When looking at the left side of the image, there is a woman grating daikon (Japanese radish). This woman is in fact the famed onnagata (female impersonating) kabuki actor Onoe Eizaburo. For the sake of new year, with delicious and soft mochi in front of them, the figures in this picture must have thought about consuming the mochi together with grated daikon. These people, who have throwing in a lot of hard work, must have been waiting and looking forward to the moment that the first stage of the work would come to an end, so they could enjoy a taste of salty mochi in soy sauce.

Daikon was one of the most commonly eaten vegetables in Edo. The vegetables that were brought to Edo by boat were mainly unloaded at the coast of Kyobashi, and it is said that most of these vegetables were daikon. For this reason, the area was also known as the Daikon Coast.

Daikon can be kept long and has a high nutrition value. Since you can keep daikon even longer when making it into takuan (pickled Japanese radish), the people of Edo thought of daikon as a convenient vegetable. When freely consuming mochi during the new year, daikon must have also been part of the feast.

The Tough Men who Prepared Mochi 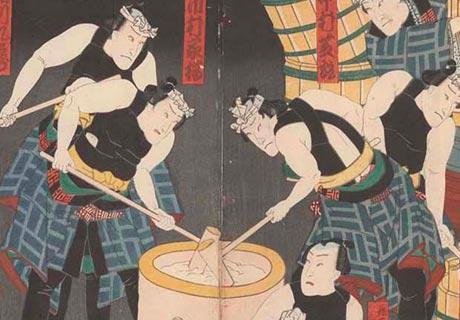 This ukiyo-e print originally consists of five sheets. On the right side, there are supposed to be two more prints where mochi is prepared by men resembling kabuki actors. In the middle of the image, two or three men pound and knead glutinous rice. In the back, a man steams rice in a large iron pot, and in front of him men with face towels tied around their heads prepare the mochi with both hands.

With towels tightly tied around their foreheads, the men look dashing and stylish, like real Edo townsmen. In this composition they face each other and closely cooperate with one another Their expression resembles that of kabuki actors, and their energetic work outside in the cold air is well expressed in the image.

According to the illustrated book Tōto saijiki (Annual Record of the Eastern Capital), published in the 9th year of Tenpō (1838), men who pounded rice for a living only appeared in this particular season. It is said that they formed groups of four or five men who brought their own cooking stoves and seirō (steaming baskets), and went from place to place to prepare mochi. If you would hand them glutinous rice, they would prepare fresh mochi for you in front of your house.

As written in Tōto saijiki: "In the streets, tough men produce mochi day and night", you could have mochi prepared in the streets of Edo during the bustling days of New Year, no matter if it was day or evening.

If you made it to the new year safe and sound you could eat mochi at the end of the year. The flavor of mochi brought a sensation that excited most people. Thus as seen in these ukiyo-e prints, mochi was a food that the people of Edo loved to eat. With the New Year mochi-eating tradition continuing today, the love for mochi remains alive and well to this day.

Various kinds of daikon (Japanese radish), such as Nerima-daikon were cultivated in and around Edo. There were both thick daikon that could be tightly grasped in one's hands, as well as small salty daikon known as Kameido-daikon. 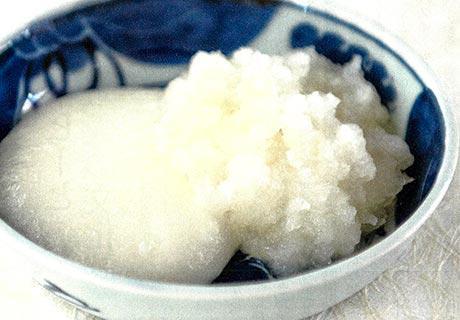 1 Grate daikon until it becomes juicy
2 After slightly cooling the fresh mochi, make your hands wet and tear it to the right size
3 Put no. 1 and 2 in one dish and add soy sauce